My theories, hopes and thoughts based on trailer for the Breath of the Wild sequel released E3 2021.

Zonai Connections with the Twili (Theory)

It seems very possible that the Zonai will feature in the BOTW sequel. Ruins in their style are visible in the E3 2019 trailer. The ruins in Breath of the Wild are everywhere, which almost seems meant to invite speculation -- as does their name, a play on nazo (謎), meaning "mystery." (Creating a Champion, pg. 341) Link also appears to have a Zonai dragon head weapon that shoots flames in the E3 2021 trailer, and Zonai ruins feature prominently in the E3 2019 trailer.

Creating a Champion says that "The Zonai themselves are spoken of in hushed whispers as strong magic wielders who vanished suddenly thousands of years ago." (pg. 413) This sounds remarkably similar to the Twili, who were banished for weilding powerful magic. The magic shown off in the E3 2019 trailer and Link's arm itself in the E3 2021 trailer are also visually similar to Twili aesthetics.

Some have also drawn a connection between the Fragmented Momument quest in BOTW and the Mirror of Twilight. In this minor shrine quest, Link must find shards of a broken oval monument near Zonai ruins with text that glows blue-green at night. I find this connection far-fetched beyond potentially being an Easter egg -- the Mirror of Twilight should theoretically be completely shattered, and the monument just has instructions to open a minor shrine. 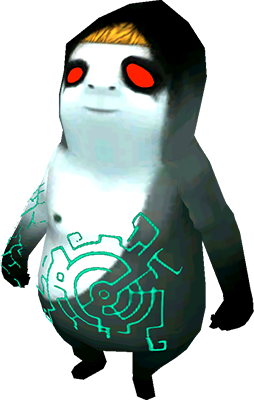 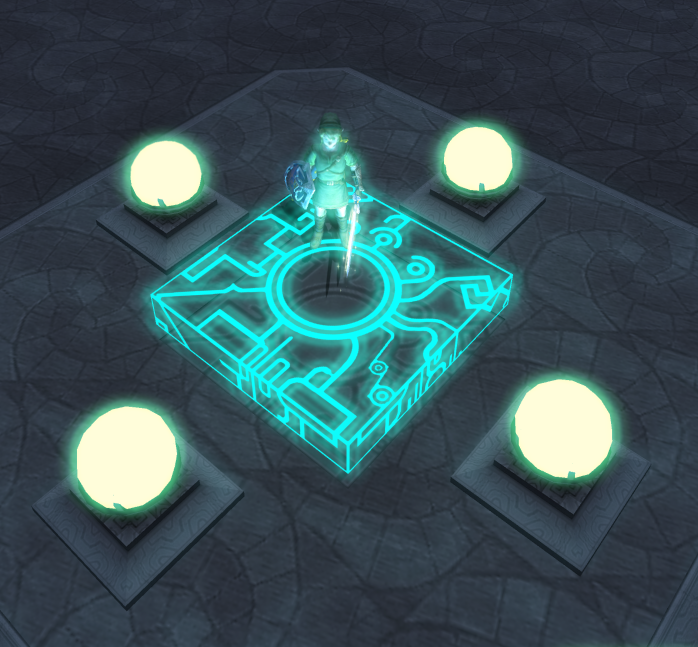 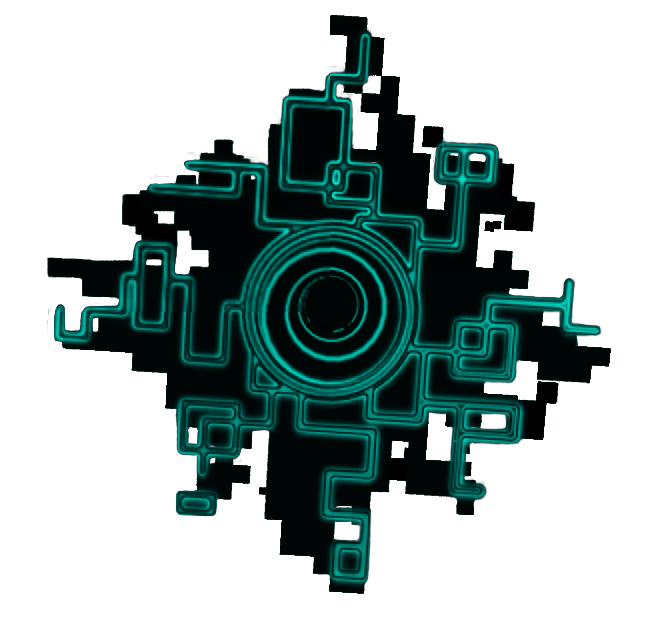 Zonai Connections with the Sheikah (Theory)

The passage in Creating a Champion talking about the Zonai wielding powerful magic and sudden disappearance could also refer in part to how the Sheikah were oppressed by the royal family some time after the events of 10,000 years ago because their technology could be a threat to Hyrule. (Creating a Champion pg. 101, 360, 362, 367-68; also described in BOTW) The Zonai, if an offshoot of the Sheikah could've been destroyed as a part of this oppression, especially if they were particularly powerful and (as I'll touch on in a moment) did not serve the royal family. Further, Creating a Champion says that "the Zonai ruins throughout Hyrule seem to have elements connecting them to the ancient shrines" (pg. 413) built with Sheikah tech, and the magic Link uses with his new arm in the trailer also resembles the Sheikah tech we see in Breath of the Wild with some differences. It seems, then, that Zonai tech is different but related to Sheikah tech.

There are also clear connections between Sheikah and Zonai aesthetics in the trailer. Link's shield and the green stone creature combine the Sheikah eye with the swirl, splatter-like and "dots/circles within circles/squares" patterns associated with the Zonai. (See the Barbarian Armor, Lomei Labyrinths and Zonai state pictures for a sense of Zonai style.) Notably, the Sheikah eye's tear -- which has been seen in every other iteration of the Sheikah eye prior -- is missing in both the shield and the creature. The Legend of Zelda: Encyclopedia says that "The Sheikah live as shadows of the royal family and go to any lengths to achieve a goal. Knowing this, the eye on the crest sheds a single tear." (pg. 44) The lack of a tear indicates that the Zonai are unaffiliated with the royal family. Perhaps they became split off from the main Sheikah tribe because of this lack of affiliation. The relative peacefulness of the modern Sheikah, even in the face of Hyrulean oppression, in contrast to how the Zonai are described as "barbaric" would make sense for a split. However, they could also be a precursor to the modern Sheikah tribe. As Zelda theorist YouTuber NintendoBlackCrisis points out in chapter one (the recap section) of their speculation video about the Zonai, Zonai ruins are often close to Sheikah shrines (and these look a little . The Lomei Labyrinths, they insinuate, are Sheikah recreations of Zonai architecture -- they are much larger, seemingly newer and slightly different in stonework. 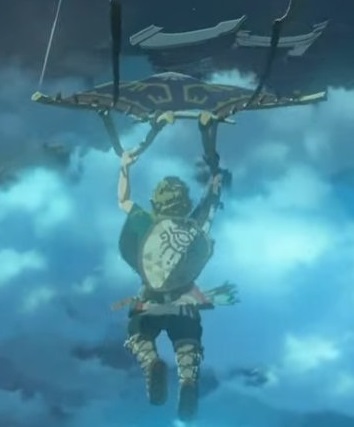 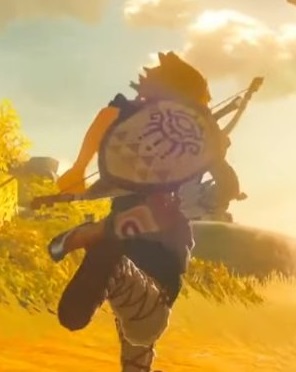 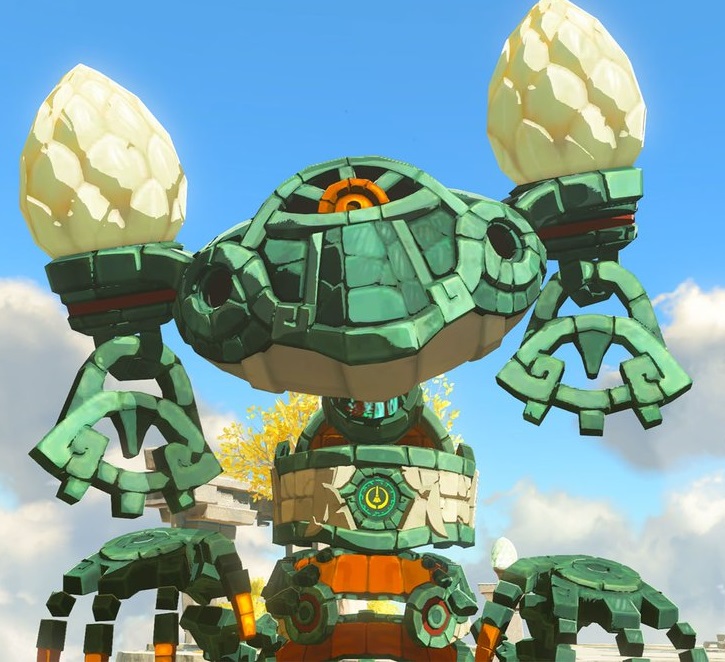 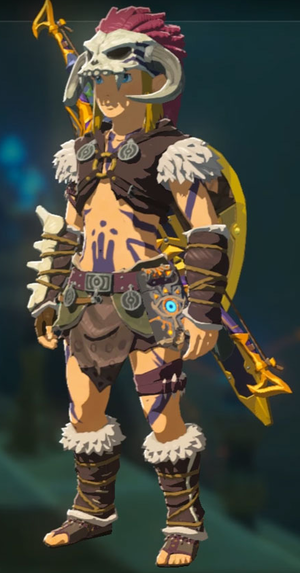 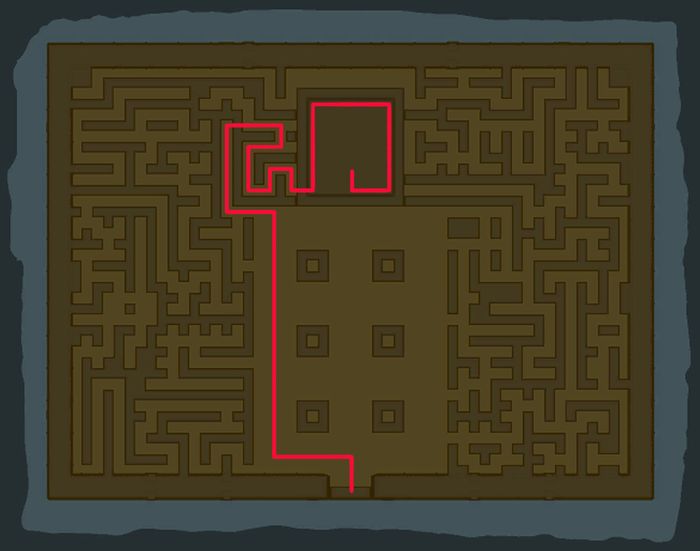 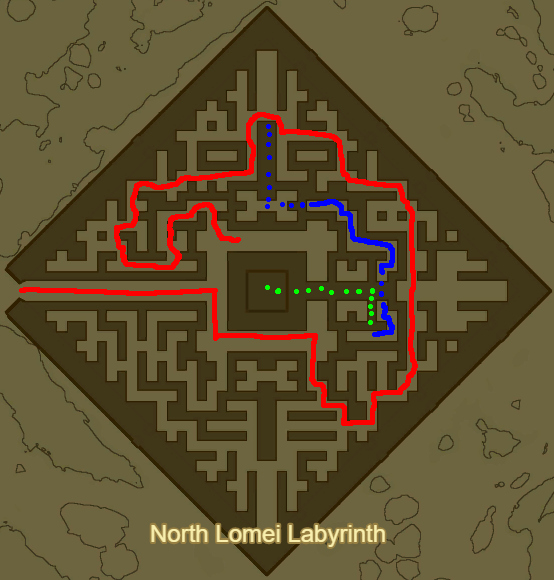 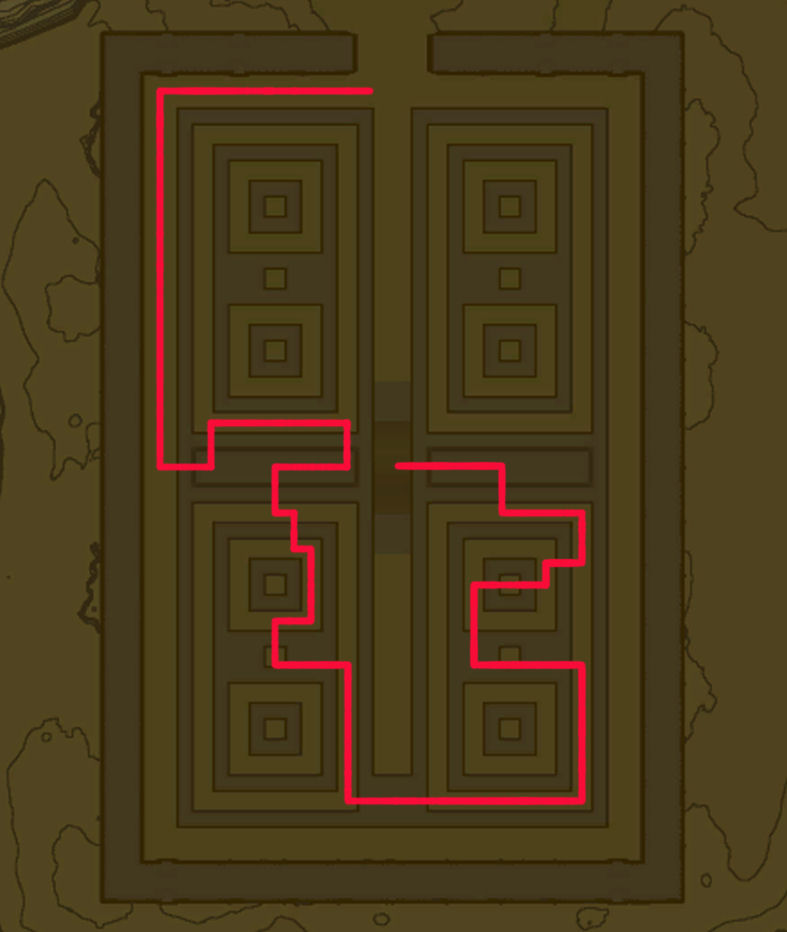 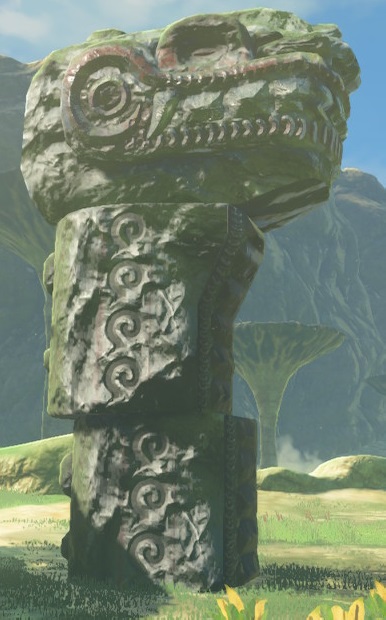 Features Link from 10,000 Years Ago in Post-BOTW Hyrule (Theory)

The Link in the trailer is remarkably similar to the depiction of the Link from 10,000 years before the events of BOTW. The shield and creature here also bear Sheikah eyes without tears, indicating that they may have come before a split between Sheikah and Zonai, or simply before Sheikah affiliation with the royal family. Notably, the trailer does not show us Link's face at all after the shot of his arm transformation.

Many people have theorized this game is set in the past, during the events of 10,000 years ago. While exciting, the more I've considered this, the less it makes sense. What would the intent be to redo a seemingly successful defeat? Even if there are time travel things to fix, or even if we're just reliving memories from 10,000 years ago as they actually happened, why, narratively, would the developers step away from the very exciting, high-stakes events of "present day" post-BOTW Hyrule they've set up? (They could bounce around chapter to chapter, but I can't really see them doing that.) We also see the castle lift up out of the ground in that same "present day" post-BOTW Hyrule, implying that the other islands we see in the trailer have risen in this same time period and that that's when they're being explored by the Link we see.

So what if, instead of being set in the past, the BOTW sequel features the Link from 10,000 years ago, and he saves modern post-BOTW Hyrule? What if that hero reawakened when Ganondorf's corpse was reawakened? The Link of 10,000 years ago's spirit and magic may have been what was keeping Ganon sealed away down there. BOTW Link may very well have been transformed into this older form by the immense power of the arm magic. 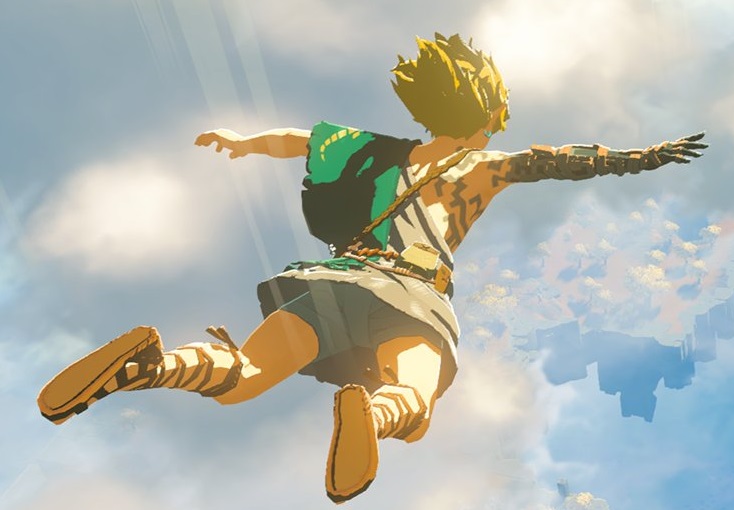 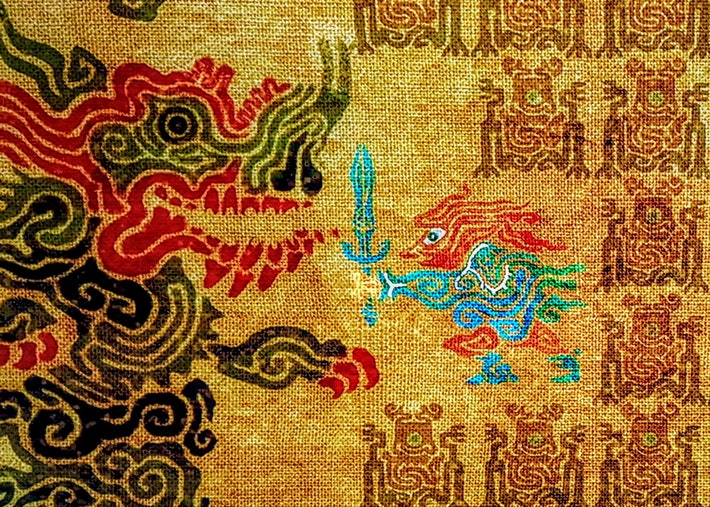 The parallels to Skyward Sword are fairly obvious. The shot of Link diving into the sky in the trailer looks very close to shots of Link diving past the cloud barrier in Skyward Sword, and, of course, there are the islands in the sky. More subtly, they also share the concept of Link diving into the clouds into a new world after Zelda has fallen and must be saved. This is a stretch I'm about to make here, but the timing of the BOTW sequel reveal, on Zelda's 35th anniversary and around the 10 year anniversary rerelease of Skyward Sword, may be very subtly intended to make us think about both of these games at the same time and encourage speculation about a connection between the two.

Since we're back in the sky, it would be cool to see Skyloft. Did all the islands that were originally up there come down? Was it just the goddess statue? If there are still islands up there, is anyone still there? Who -- or what?

Fi was actually hinted to a few times in Breath of the Wild, though not by name. Zelda makes a passing reference to a the legend of a voice within the Master Sword in one of the memories. In another, after Link has fallen in battle, Zelda hears instructions from the Master Sword, which glows and plays Fi's signature sound effect, and at the end of the game, Zelda explicitly refers to Fi again, mentioning that she "can no longer hear the voice inside the sword." At the end of the Trial of the Sword DLC, when Link unlocks the Master Sword's new power, the sword glows and makes that same noise again.

With the parallels and possible connection to Skyward Sword mentioned before, could it be possible that Fi might return? It's particularly interesting to me that Fi seems to be tied to Zelda specifically in Breath of the Wild, and that it appears that the Master Sword falls with Zelda in the E3 trailer. Maybe they'll interact again? (It would also be very cool to see a new design for Fi if she does come back. Given she was sealed away at the end of Skyward Sword, she would have to be thousands of years old at this point and she's been through a lot -- maybe now she's fancier, damaged, etc.?)

As much as I love the series, Legend of Zelda has never been great about Zelda. Though she often plays an important part in the story, I've always found how little screentime and development and how much rescuing she needs despite being a powerful, vital character a little disappointing. That's why, truthfully, I can't bring myself to believe she'll ever actually be playable in a mainline Zelda game. But god do I want it, especially after she got so much love and development and agency in Age of Calamity.

For the BOTW sequel I would love a chance to play through Zelda's adventures in the underground. That said, I'm not sure if I'd prefer to do a back-and-forth chapter-by-chapter thing or a second route, and I can't really imagine a game like Zelda doing either of those things.

<<< back to Faron Spring main page