Puffkins were first introduced in 1997 by Swibco. These spherical, armless plushes were clearly meant to compete with Beanie Babies, as evidenced by their heart-shaped tag with a name and poem and the scarcity built through low production numbers and frequent retirements, and many contemporaneous sources I can dig up now (archived Geocities sites, citations from Mary Beth's Bean Bag World/Mary Beth's Beanie World) have ties to the Beanie Baby community. From a modern perspective, though, they have a very distinct charm. Puffkins have much fewer beans and a stiffer outer "shell" than Ty's Beanies! This gives them a little more shape and structure -- which also makes them more suited to humanoid friends (wizards, vampires, etc.!) than Beanie Babies.

It doesn't seem like Puffkins had the same cultural impact as Beanie Babies; sources available on the modern web are few and far between. The line was relaunched with new material in 2007 (archived announcement for Puffkins 2 on Swibco's website), but they must have been discontinued in the years since, given that they no longer appear on the Swibco website. (Sources for the discontinuation of Puffkins 2 are also apparently nonexistent.)

However, there are some signs that Puffkins were loved by those that did know them -- see the archived Puffkins fansite, Puffkins Digest! :) 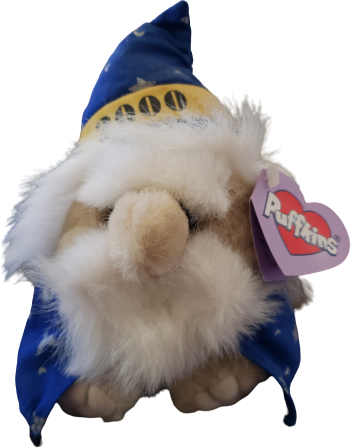